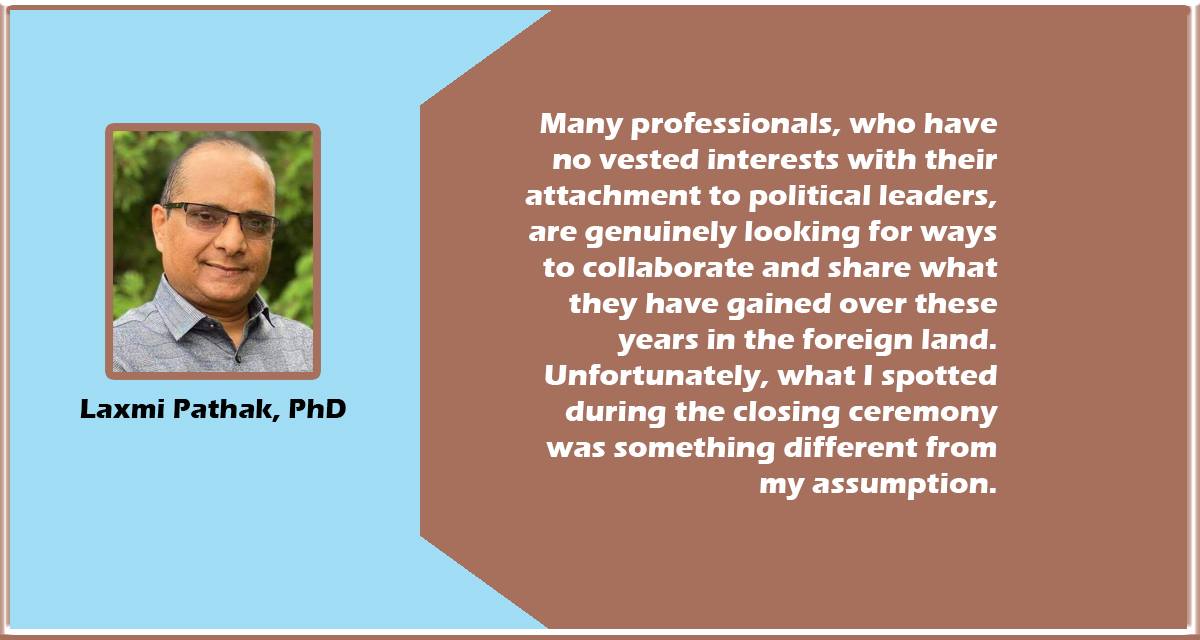 The 2nd Knowledge Sharing Conference, held on the 5th and 6th of September 2020, has recently been over with a Toronto Declaration that calls for collaborations. This historic event was formally hosted by NRNA NCC Canada, organized by NRNA regional officials, and supported by NRNA ICC executives. However, the real bearers of this conference were the chairs from each session who worked day and night along with the members of knowledge committee comprised of three scholars including myself.  Deeper than that were the actual paper presenters with recommendations that are applicable to many sectors in Nepal’s context.  It was a historic moment for Nepalese residing in Canada, a matter of pride for those in the Americas, and a great trust building opportunity for many residing both in and out of Nepal. The event provided experts from Nepal and the Americas with a common virtual platform to share knowledge and skills, along with a search for certain areas of collaboration. In the given context, I share my own experiences of working with all good human beings who have left lasting impressions on me! I also highlight my perceptions regarding what next. While acknowledging dozens of notable things identified and processed during those two days, I deliberately exclude them,  given the time and scope of this brief reflection.

In my case, this was the first time I have ever fully immersed in NRNA’s noticeable event with assigned commitments. As a team, we worked together by being respectful to one another and accomplished our tasks as promised, leaving some room for future improvements. Working with Nepali Diaspora, more importantly with those intellectuals and skilled scholars from diverse fields, was a great opportunity for not only networking, but also for sharing with, and caring of, one another. This exactly happened in my overall observation and professional experience. I found those full of wisdom were often concerned with how they could contribute. To its contrary, many of  the ‘high-sounding professionals with self-declared knowledge experts’ were relentlessly playing around and seeking the space forcefully to be visible. I witnessed and came across two types of intellectuals: one with a big hunger of media, and the other with a search for more in-depth knowledge  and skills to be shared. The first ones were doing less and sounding much, whereas the second ones often preferred to remain in low profile and contributed to the fullest extent along with deep passions to collaborate. This, I think is a general scenario among Nepali migrants and intellectuals. Sensing the meaningless conflicts in some speakers’ address in the opening ceremony, the invited Foreign Minister sarcastically suggested all Nepali migrants to stay united and feel proud of their Nepali identity.

Minister Gyawali’s address took me back to those days in Nepal where I was born, brought up,  and educated. With the hopes of continuing my education and looking for absurd future, I migrated to Canada with family some ten years back. These ten years in Canada have been the years for walking the two worlds and experiencing the two worldviews: the Eastern and the Western. Many first-generation migrants like my family are in a state of living in the ‘in-between’ of Eastern and Western values. At times, I personally feel torn apart while dwelling in such a space of in-built contradictions. My intent here is not to portray a dark picture; rather, it is to admit how we all have gone through some vulnerabilities over these years.  Despite all that, we have updated ourselves with new knowledge and mastered many valuable skills over these years. A large number of Nepali migrants in the Americas have proven their worth in many reputed colleges, universities, health sectors, and in the field of science and engineering. A few of these professionals, however, are still drowned into the dirt of stinking low-level interpretation of back home  party politics. The point is: many of them have displayed changes in their sayings and doings, and there are many others still to grow.

Many professionals, who have no vested interests with their attachment to political leaders, are genuinely looking for ways to collaborate and share what they have gained over these years in the foreign land. Unfortunately, what I spotted during the closing ceremony was something different from my assumption. There came a genuine issue of inclusivity in all events. This issue was (and always is) undeniably a valid one with high intensity and gravity. However, a few ‘so-called self-declared bigya and activists’ with hidden motifs sweepingly initiated a ‘hue and cry’ and tried to abort the gravity and intensity of inclusivity. To put in other words, it was trying a losing battle, a futile effort to hijack the bright sides of the event. Keeping everything at a bay, I consider these sprinkles of dirt as one aspect of life experience, and I personally thank all these “chicken-hearted” individuals who were peeping through the window and were so much concerned about what we were doing! This aligns with what Haidt, a moral psychologist states: human beings are 90% chimp and 10% bee. So, what really matters at the end is the delivery (often uttered by one of knowledge committee members), and the delivery was made with utmost professionalism. Said this, I personally have no reservation to acknowledge the areas to improve while running similar events in future. There is a lot to do to include one and all to have meaningful representations. we are all in a process of learning; and, true learners acknowledge the weaknesses and determine to, if not overcome, minimize them  in future. Given the time constraints and the havoc of COVID-19, I take this moment to state with pride that we did what we could!

Now the question is: What next? The simple response to this question is: it’s all now about how our NRNA ICC leaders’ approach, continue, and develop trusting relationships with potential stakeholders in Nepal. I was glad to hear the ICC President address the event who clearly indicated the potential collaboration between Nepali Diaspora and Nepal government, including private sectors. In various sessions and forums, many distinguished speakers / leaders represented their political parties and assured their willingness to go along . In the days ahead, what concerns most is about how we translate our words into actions. Usually, people say what they do not do and do what they do not say. I think this spiral rhetoric needs continuous fixing in order to ensure alignments between what promises we make in big conferences and how we keep them thereafter.

To conclude, the 2nd Knowledge Sharing Conference, despite some areas to improve, offered an overwhelming experience to me. Most importantly, it provided many of us a shared forum to act, interact, and grow from there; and,  it ended calling for collaborations between Nepali Diaspora and stakeholders working in different sectors. Finally, I wonder why good people are divided by politics! Can’t we all go along? Thanks to all!

Mr. Pathak holds a doctoral degree in Education. He is a lecturer at Lakehead University, Thunder Bay, ON, Canada.