Sudarshan Sharma
Published on : Tue, 27 Oct, 2020
No ads found for this position 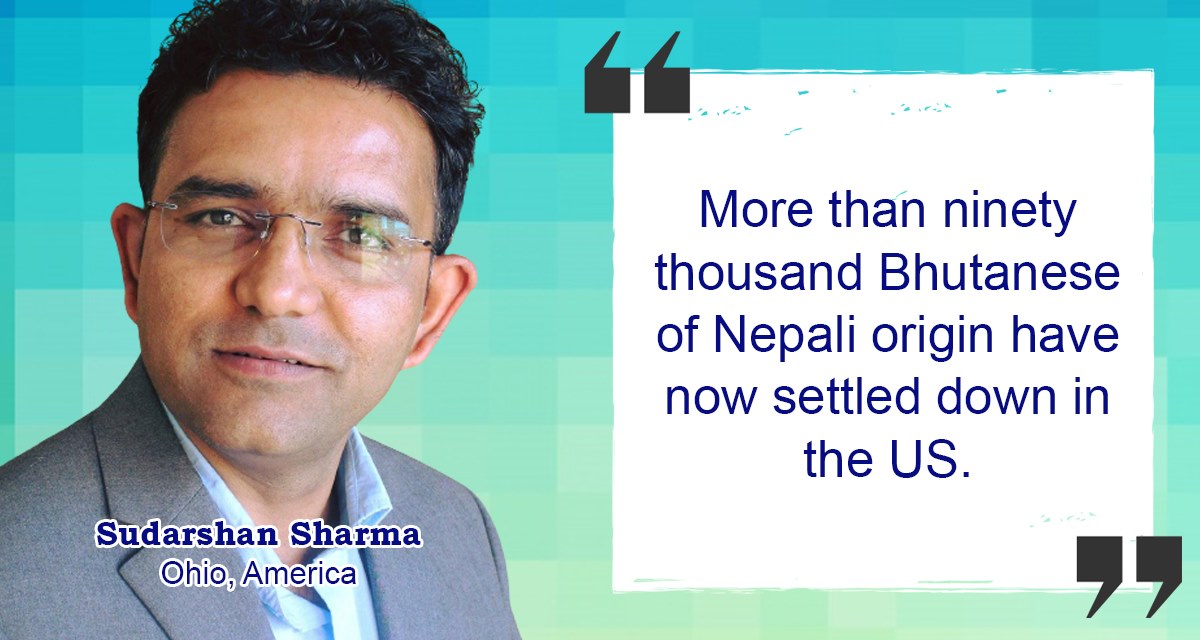 It was an arduous journey in becoming American for a small ethic group of Bhutanese-Nepali. The journey started perhaps what we may consider the first migration in 1620s, interestingly, coinciding with the Mayflower pilgrims. Of course the journey was not to America but to the last Shangri-La of the world to a tiny country deep in the Himalayas. It was a slow and sporadic family migration for the next 200 years, adding eventually to the mass migration during the 19th and early 20th century.

The migration to southern Bhutan came as a result of historical exchange of religion, art and culture between the two Himalayan states. Particularly the later part of the migration was in search of better opportunities, to escape seasonal famine, regional conflicts. More importantly, it was a natural progression of historic migration. The Nepali speaking “Khas” were mountain rice farmers skilled at carving mountains for creating agricultural land mostly rice. They added corn, millet and barley, along with livestock as they moved east.

One reality these farmers constantly faced was land depletion and population growth. The land depletion happens rapidly in mountains and hills because rain and animals can deteriorate land in no time coupled by the unpredictable monsoon. As it is said, “agriculture in South Asia is gambling with monsoon”. One of the options for farmers was to move further east in search of better opportunities.

A hope they were yearning was to find new land and settle down. This included overcoming difficult terrain, choosing a better and safe location, and dealing with diseases. Land is not abundant in this part of the world, so the struggle becomes even bigger. The only option was to move further east in the range of southern foothills of the great Himalayan terrain. They migrated via Sikkim where some families settled down and other further moved ahead crossing Bhutan into the eastern Indian state of Arunachal Pradesh, Assam, Manipur, and Maghalaya. Those who chose to settle down in southern Bhutan were referred to as Lhotshampa. As the settlement began, the Lhotshampa were welcomed and were sanctioned land and resources in exchange of revenue through taxation.

However, once what was seen as the golden opportunity turned into miserable fortune. After the birth of modern Bhutan in 1907, the newly established Wangchuck dynasty began to consolidate power and isolated itself from the rest of the world. During the period of isolation, people who settled in the south became substantially better-off than the people in the north because of agriculture, proximity to India. More importantly, they were adapting to an agricultural economy much faster than their counterparts in the north which brought prosperity and population rise in the south. With rise in economy and easy access route to India, the only passage to the rest of the world, the Lhotshampa began to emerge as a real threat to the monarchy. By 1972, a neighboring state Sikkim ceased to exist as a nation that added to the anxiety of growing Indian hegemony in South Asia, and threat to the monarchy in Bhutan.

With these factors in mind, Bhutan began to carefully plan its future out of which came the “one nation one people” policy and the census of 1985. Both policies turned out to be detrimental to the Lhotshampa population because the plan aimed to reduce the Lhotshampa population below 20%. By that time, the Lhotshampa population was close to 40%. By all estimates the total population of Bhutan in 1985 was no more than 725,000 of which around 300,000 were the Nepali speaking Lhotshampa. Although all southern Bhutanese were granted full citizenship by the 1958 Citizenship Act after the national censure of 1985, the regime began to exploit loopholes in the system to delegitimize earlier actions. Since Bhutan lacks an independent judiciary, Lhotshampa had nowhere to seek justice, and the country was isolated from the rest of the world. Bhutanese regime executed its final plan by seizing citizenship and lands were forcefully grabbed by mobilizing the Royal Bhutan Army and Royal Bhutan Police in southern Bhutan.

By 1993, Bhutan had expelled one-sixth of its population, mostly the southern Nepali speaking Lhotshampa, into neighbouring India and Nepal. Within that period, almost 100,000 sought refuge in Nepal leaving everything behind. As refugees in the United Nations refugee camps in eastern Nepal, they spent the next two decades in limbo. After their plight was taken up by the international community, a new dawn emerged in the UN refugee camps in Nepal. Methods were devised to provide them citizenship in seven western countries including the United States. In February 2008, the first family officially flew to the US to settle down in Washington State. Since then, more than ninety thousand Bhutanese of Nepali origin have made the US their new home, and the rest have made their way to Canada, Australia, New Zealand, Denmark, Norway, and Great Britain.

(The writer is a Bhutanese American now residing in Ohio, USA)