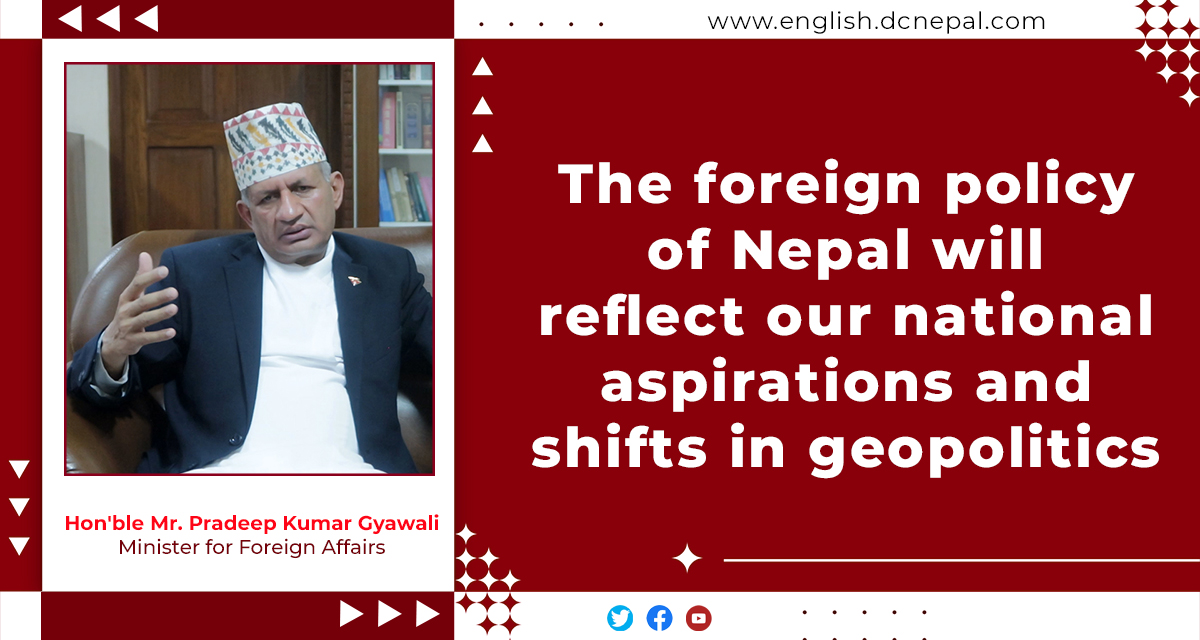 “Foreign policy is also an extension of domestic policy. Its main objective is to promote and protect national interests. The new foreign policy document will reflect the shifts in our national aspirations and geopolitics. The previous governments have also come up with such documents. The upcoming document will be comprehensive in nature and incorporate the wider aspects of foreign policy.”

“Nepal and India are very good friends and close neighbors. The relationship should be based on mutual trust and the principles of sovereign equality. It needs to be dynamic in nature and incorporate the changed times and context. As both the countries are close to each other, it is natural for occasional differences and misunderstandings to occur. The history has left us with some unresolved issues like the matters related to the 1950 Treaty of Peace and Friendship and boundary issues. All irritants that plague Nepal-India relations should be resolved. When India published a new political map, we sent a diplomatic note in protest to make our position clear. We also proposed dates to have a diplomatic dialogue to address the issue. However, the response has not been forthcoming yet. As the Covid-19 crisis was raging, India inaugurated a link road (via Lipulek) which necessitated us to come up with our new map. In spite of no tangible dialogue on the matter, we are in constant touch with the Indian side and expect a meeting to be convened soon for resolving the dispute as well as other pending issues.”

“Nepal and China are close friends and their relationship exemplifies good neighborliness. In spite of vast difference in size, economy, and political system, we have had a trouble-free relationship with China. Nepal is a signatory to the Belt and Road Initiative, and the overarching framework of Trans-Himalayan Multidimensional Connectivity Network encompasses our major development partnership with China. We are expediting major projects such as the Kathmandu-Kerung railway and Koshi, Gandaki and Karnali economic corridors. During Chinese President Xi Jinping’s visit to Kathmandu last year, he highlighted that implementation of these projects is the major part. We have been constantly prioritizing to expedite the implementation of the projects under the BRI. The accusations leveled against China with regards to the alleged land encroachment in Humla are not true. Few years ago, similar types of reports had emerged in the media and the issue had already been clarified then. The field visit led by CDO of Humla has verified the case and there is no issue at all as claimed by the media.”

“The United States is a major development partner of Nepal. The Millennium Challenge Corporation (MCC) is a much needed development project for Nepal in the areas of developing road infrastructure and transmission lines. The questions and doubts raised against the MCC are highly exaggerated. The MCC task force formed by the Nepal Communist Party (NCP) has already submitted its report. Even if any provisions in the MCC have to be revised, we will discuss the same with the US government. I hope that the party will take a wise and mature decision in this regard as it is not only related to the credibility of the party but rather of the government and country as well.”

“The recruitment of soldiers in the foreign armies is a historical fact. There are multiple dimensions to look at it. While it opens many windows of opportunities for Nepali people in terms of employment, there are certain constraints associated with it. Nepal’s foreign policy is based on the principles of non-alignment. We believe in ‘amity with all and enmity with none’. When a country has confrontation with another country, our citizens in the army of that particular country have to fight from the side which has recruited them. Therefore, the overall aspects of this type of recruitment need to be analyzed. When Prime Minister KP Sharma Oli visited the UK, he became the first Nepali prime minister to raise the issue and declared that the tripartite agreement regarding Gurkha soldiers recruitment needs to be analyzed as we are interested in having bilateral agreements with concerned countries instead.”

“Press freedom is the beauty of democracy and the government is open to constructive criticism. I feel that we all should be objective in our criticism. The government is doing its best to tackle the Covid-19 pandemic. Nepal has an open border with India and it is a major challenge to manage the flow of  people across the border. Similarly, we have brought back more than eighty thousand Nepali people from different parts of the world. In spite of several constraints, we have set up 50 labs for conducting PCR tests. So far one million tests have been conducted and it amounts thirty four thousand tests per million people. The infections are gradually increasing but the death rate is comparatively low. The Covid-19 is an unprecedented crisis and the federal, provincial and local governments are doing their best to manage it. The Commission for the Investigation of Abuse of Authority (CIAA) has taken up maximum number of cases over the last two years and Nepal has also made progress in the Transparency International’s index. Therefore, the government is fully committed towards good governance and it is trying its best to arrest corruption.”