In defence of PCR

Sanam Parajuli
Published on : Tue, 27 Oct, 2020
No ads found for this position 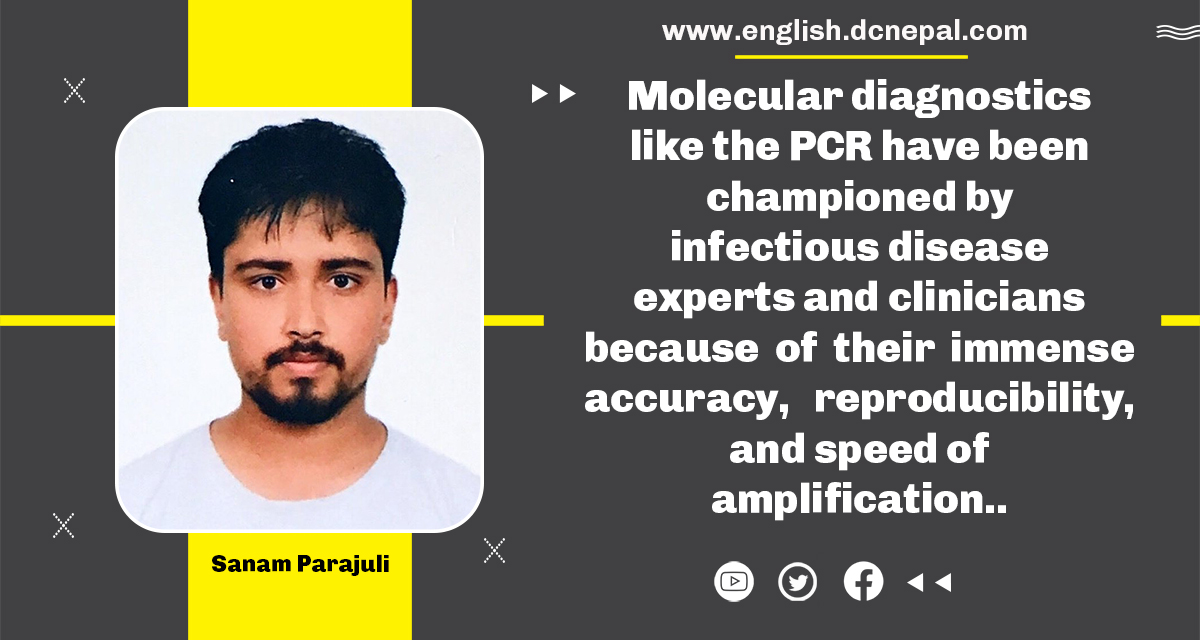 Just a few months ago, the government of Nepal was obsessed with procuring and using Rapid Diagnostic Tests (RDTs) for SARS-CoV-2 diagnosis. People took to the streets and social media demanding for hundred percent of coronavirus tests to be Polymerase Chain Reaction (PCR) tests. The government has completely confided on PCR tests now, albeit in very small daily numbers.

PCR, a DNA amplification tool that has been the forerunner of molecular diagnostics for more than a decade now, is yet another victim of COVID-19 conspiracy theories after masks and vaccines.

How the Coronavirus PCR test works

Properties of a virus are guided by the information written in its genome. But unlike us who have DNA genomes, coronaviruses have an RNA genome. The genomes of each virus species are different; even two individual virus particles of the same species can carry slightly different genome sequences because of mutations. But within a species, there are several functional regions or genes in the genome that resist mutations, the sequence of which are unique to that species.

What a PCR test does is it detects the presence or absence such unique regions particular to any species, in this case the SARS-CoV-2 virus. Since the viral RNA can be present in very low numbers in the sample, they should be vastly increased in number for detection.

In the PCR testing for SARS-CoV-2, the RNA of the virus in the sample is first isolated, the process which is called RNA extraction. This RNA is then converted into its complementary DNA. The resulting DNA molecules in the mixture are amplified into millions and billions (depending on the number of cycles, which is generally 40) using short DNA molecules known as primers and a DNA polymerase enzyme, hence the name PCR. Primers are designed such that they recognize onlya certain unique region of the DNA molecule that we were talking about earlier. Amplification, and thus detection, will only occur if these target regions are recognized.

Real Time-PCR detects amplification (or lack of it) as it is happening in our reaction mixture, the results of which are displayed on a computer screen.

This means a PCR test kit designed for detecting SARS-CoV-2 cannot detect any other virus, not even the closely related SARS-CoV. This accuracy is what makes the PCR test the method of choice for SARS-CoV-2 detection today.

To reduce the possibility of faulty diagnosis and proper running of the reaction, generally three such coronavirus-specific genes are targeted in the reaction (but this can change), and one human gene as internal control. The target coronavirus genes are generally chosen from ORF-1ab, RdRp, E, N, and S genes. If the internal control does not give any amplification, it is assumed that there are some faults in the experiment, and the process is repeated. If only one or two coronavirus genes are detected, then the results are considered inconclusive and the process is repeated. Detection or absence of all three genes along with a positive result in the internal control provides a conclusive result.

Is the PCR test faultless?

No, it is not. Like with any other test, errors can arise because of faulty sampling, improper handling and storage of samples, contamination in the laboratory, and because of the quality of the test kit itself. Sampling too early into an infection can give false negative results because of a low viral titre/load, i.e., the test says you do not have the virus despite you being infected. Majority of false positive results, however, occur because of contamination by other samples during collection, handling, or in the laboratory. Even the tiniest amount of contamination can give a false positive result because the test is really sensitive.

No test kit can claim itself to be 100% accurate. If a test kit claims to be 90% sensitive, for instance, a simple probability calculation will tell you that there will still be a 1% chance that a person will be diagnosed negative after two tests using the kit even though he/she is infected. So, if you have COVID-19 symptoms but you test negative, the best thing to do would be to get tested again. But if you cannot do so, you should isolate yourself from other people for at least two weeks and monitor your symptoms.

Similarly, there is another parameter to judge the accuracy of a test: specificity. This is the test’s ability to correctly identify virus-free people as healthy. So, a test with high specificity should give minimal false positives. But like sensitivity, a test with 100% specificity is virtually impossible to obtain. This, along with sampling and handling errors, can lead to faulty diagnoses.

A positive PCR test result can also denote the presence of “dead” viral RNA in the sample instead of active viruses. A person diagnosed under such circumstances might not be infectious, but to determine whether he/she is or not, it will take time consuming laboratory analyses with special containment requirements. So, the best thing to do in any case would be to isolate a person with a positive test from other people.

But despite all this, if performed correctly, PCR is still the most reliable diagnostic tool that we have as of today in terms of accuracy, and test kits are getting better by the day.

PCR tests can take a long time to produce results, the lengthy process mainly being attributed to the RNA extraction process compounded by a very high number of samples coming into a laboratory. But new and better technologies are on their way, and if any of those can outperform the PCR test in terms of accuracy, time, and cost, we will have a new technology of choice.

Did Kary Mullis really say that?

There is a rumour floating around social media that Dr. Kary B. Mullis, inventor of the PCR, said that the test cannot be used in detecting the coronavirus, or any viruses. This has been used a lot by people opposing PCR tests to provide substance to their claim. Although Mullishad resorted to making pseudoscientific claims about HIV/AIDS and climate change, he never said that PCR should not be used in virus detection. So, where did this rumour come from?

Reuters Factcheck, among other dedicated fact-checking websites, has debunked this claim rather elegantly. The quote being cited by most of these social media posts comes from an article written by John Lauristen in December 1996 about HIV/AIDS where he has said that PCR tests do not provide quantitative estimation of the virus load, but are qualitative in their very essence. His quote has been taken out of context by social media users and has been misattributed to the Nobel Laureate Mullis for reasons best known to these conspiracy theorists.

Another video from an Australian conspiracy theorist also misattributed quotes like “The idea these kits can isolate a specific virus like COVID-19 is nonsense.” to Dr. Mullis. Dr. Mullis died on 7th of August, 2019, way before the SARS-CoV-2 virus was even identified, so there is no way he could have said that. AAP fact checker quickly found out that these quotes were instead from an anonymous online commentor.

Hospitals and private laboratories are still overcharging for a COVID-19 test despite being asked by the government to reduce the prices as reagents and test kits are becoming more affordable and more readily available. People are being unjustly coerced to get tested paying hefty fees and wait in long lines overnight by their landlords.

However, we must understand that it is not the PCR test that has triggered these crises. Molecular diagnostics like the PCR have been championed by infectious disease experts and clinicians because of their immense accuracy, reproducibility, and speed of amplification for more than a decade now. Instead of blaming the science, we should be more vocal against the government’s ineptness in providing easy, accessible, and affordable testing to people who actually need it. Laboratories that are overcharging for the test must be brought under legal scrutiny. Social stigma surrounding the coronavirus and infected people must be eradicated with mass awareness so that people are neither irrationally forced to get tested nor chided for being tested.

We will never be able to get out of this crisis unless we effectively identify and isolate the infected people from communities, so rallying against testing is the opposite of what we need right now. PCR is not perfect, but it is the best diagnostic tool at our disposal today.

(The writer is a graduate student of Biotechnology at Kathmandu University, Dhulikhel)