Special Editorial
Published on : Sat, 17 Oct, 2020
No ads found for this position 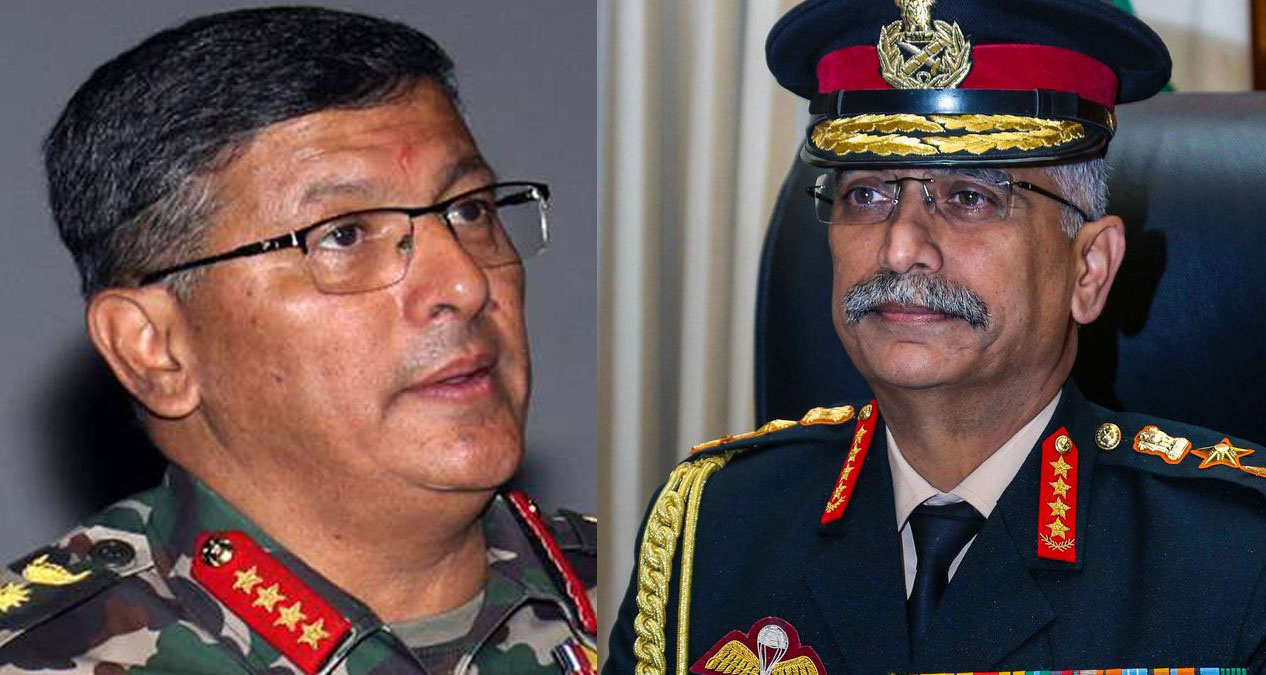 The previous two Indian Army Chiefs – General Dalbir Singh and General Bipin Rawat (both hailed from the Gurkha regiment) had apparently wanted to begin their foreign visits from Nepal. Their desires went unmet as they had to travel elsewhere first. Similarly, General Manoj Mukund Naravane, too was intent on coming to Nepal first because of India’s deep military connection with Nepal.

Immediately after becoming COAS on 31st December 2019, he communicated his desire to visit Nepal first. The Nepali Army (NA) instantly processed it through its line ministry and received government approval on February 3rd 2020; his visit was scheduled for March 2020.

Unfortunately, the scheduled visit was postponed due to several reasons. First, the pandemic gripped India and Nepal and both sides had to go on protracted lock downs. Then, an unsavory border dispute between Nepal and India erupted. But, a graver challenge befell on the Indian Army after a major border clash with China killed 20 Indian soldiers and injured many others.

The recent India-Nepal border row erupted in May after India’s Defense Minister inaugurated a road in the Kalapani area that Nepal claims as its territory. The dispute actually predates the May inauguration. It began after India released its new political map in November 2019 in which it included the Kalapani region in its territory. Following the road inauguration, however, Nepal’s government faced immense public pressure. The government then hastily issued a new political map including Kalapani, Lipulekh and Limpiyadhura and had it unanimously endorsed by both houses of parliament.

Then, General Naravane got embroiled into a major controversy. Following Nepal’s release of the new map, he said that Nepal was acting on the behest of someone else – insinuating China. Those remarks stoked the ire of the Nepalese public and politicians.

Nepal’s COAS General Purna Chandra Thapa, however, refrained from commenting even when he was pressed on multiple occasions to respond to General Naravane’s comments. Astutely aware of the consequences his retaliatory remarks would trigger, he chose to avoid getting dragged into a battle of words. Befitting a military commander of the oldest Army in South Asia, he judiciously avoided prickly entanglements simply to safeguard the prospects of future rapprochement. Instead, he quietly engaged with his Indian military counterparts to explore prospects of a permanent resolution to the border row.

General Naravane and the Indian Army instantly decoded his Nepali counterpart’s reticence. As many in Nepal continued to latch on to General Naravane’s initial remarks, his stunning turnaround only a month later, grabbed less headlines. In June, at a carefully coordinated press meet following the Pass out ceremony at the Indian Military Academy in Dehradun, General Naravane strongly affirmed that India’s relations with Nepal had intimate geographical, historical, cultural and religious linkages and confidently stated that it would only strengthen over time.

More than his affirmations, however, something else at the press meet captivated the Nepali side. A Para Commando bodyguard named Ashok Thapa was seen standing beside General Naravane. While some Nepali netizens ridiculed General Naravane after seeing a Nepali national protecting him, others highlighted the bond between the two countries.

By deliberately positioning Seargent Thapa, however, General Naravane seemed to be sending implicit messages across as well. First, he was communicating with his Nepali counter-part who also happens to be a Thapa. He was also communicating with thousands of families of Nepali nationals serving in Indian armed services who had become skeptical after the border dispute. He was also trying to deter China by showcasing that he had the world’s most feared and loyal Gurkha regiment on his side. Through that crafty positioning, he was also sending a subtle but firm message showcasing the robust military bond between Nepal and India.

At the persuasion of the Chief of Defense Staff General Bipin Rawat and General Naravane, India’s Defense Minister Rajnath Singh further reinforced General Naravane’s affirmation two days later. Speaking at a public function, Singh emphatically stated that Nepal and India had an unbreakable bond and no power in the world could sever that bond. While highlighting the deep cultural and religious bond between the two countries, he also extolled the gallantry of the Gurkha regiment in the Indian Armed services. Then he accentuated how vital ties with the NA were for the Indian Army.

Armies to the rescue again

NA and Indian Army have long shared a very unique and intimate bond. They have a rare tradition of conferring Honorary General titles to the COAS of the other. General Naravane is arriving next month for his investiture ceremony where he will be conferred with an Honorary General title by Nepal’s President Bidhya Devi Bhandari.

This visit, however, comes at a very critical period when there is a lot is happening in the region. Two military fronts, one with China and the other with Pakistan are on the verge of flaring up. India’s relations with its closest neighbor Nepal – that provides thousands of men to its armed services has soured due to the border dispute. China has made great headway in South Asia and has begun to challenge and dilute India’s sphere of influence. Furthermore, the Covid pandemic is having a massive multidimensional impact in the region

Besides the regional challenges, this visit is taking place when both Armies have become indispensible in their respective contexts. Unlike the transient political forces, both Armies are permanent institutional forces and are regarded as the national pillars of strength.

Recognizing that vitality, Prime Minister Narendra Modi has reportedly gone out of his way to woo the Army. The manner in which former COAS General Bipin Rawat was recently elevated to Chief of Defense Staff reflects Indian Army’s growing significance and leverage in India.

Similarly, NA’s credibility has remained unmatched and is regarded as the most trusted public institution in Nepal. General Thapa who is widely revered for his crusade against corruption within NA is also greatly trusted by PM K.P. Oli. Reportedly, PM values Thapa’s virtuous and professional attributes more than any other subordinate. This was clearly manifested when he entrusted the NA to procure COVID related medical supplies after other government agencies and his ministers became enmeshed in massive corruption scandals. Although such procurement was beyond NA’s remit, PM still commissioned NA.

Also, the ousting of Defense Minister Ishwor Pokhrel on the same day when General Naravane’s visit was announced was no mere coincidence. The friction between NA leadership and Pokhrel was reported widely. Since NA was utterly displeased with Pokhrel for his intrusive and rapacious nature, PM Oli acquiesced to NA’s desires and removed Pokhrel despite being his closest confidante in the cabinet.

NA’s credibility has been further bolstered by the trust it has garnered from all three major global powers. The fact that India, China and United States chose to hand over their COVID aid to General Thapa demonstrates that trust. Reportedly, all three strongly insisted on providing the aid to the NA. Despite the requests from NA to handover the items to appropriate civilian authorities, all of them apparently declined citing the unreliability of other civilian agencies.

Recognizing the strength, significance, public trust and the preserved bond of the Armies, both governments have advanced their Armies for thawing relations. Even during the height of the tensions, both governments were aware that the bond between two Armies had remained mostly unscathed. Through high level military contact, collaboration, and strategic communication, the camaraderie had continued uninterrupted. Reportedly, the Indian Ambassador in Kathmandu diligently played an enabling role in ensuring that the Army bond was fully insulated from the strains afflicting the relations.

Building back the bond

In principle, no two countries in world have such deep, wide and high relations as Nepal and India. The “Bread, Bride and Boots” bond between the two countries is supposed to be unparalleled.

But, this symbiotic relation has always had a tinge of bitterness. The recent border dispute, however, has exacerbated the situation to an all time low. Although Nepal has been consistently calling on India to hold a dialogue to resolve this dispute, India had ignored Nepal’s call and had maintained radio silence for almost six months.

The visit of the Indian COAS, however, breaks that silence and aptly demonstrates India’s willingness to engage. And this has been made possible greatly by the efforts of both Armies. They have somehow succeeded in convincing their political establishments that this relation is too vital and intimate to remain sullied and strained.

Certainly there are vested interests on both sides that are keen to sabotage this visit. Some netizens in Nepal are even attempting to invoke General Naravane’s earlier comments on Nepal to disrupt his visit. That, however, has not gotten any traction mainly because despite the deep-seated resentment against India, the larger Nepali mass understands the vital need for dialogue with India.

General Naravane’s visit is immensely crucial for both countries. The visit is the outcome of massive behind the scene efforts made by both Armies to bring the two countries together. They seem genuinely intent on exploring prospects of resolution and heralding a new era in bilateral relations. Devoid of other plausible alternatives, the Armies must be granted the benefit of doubt and allowed to strengthen the brotherly bond.