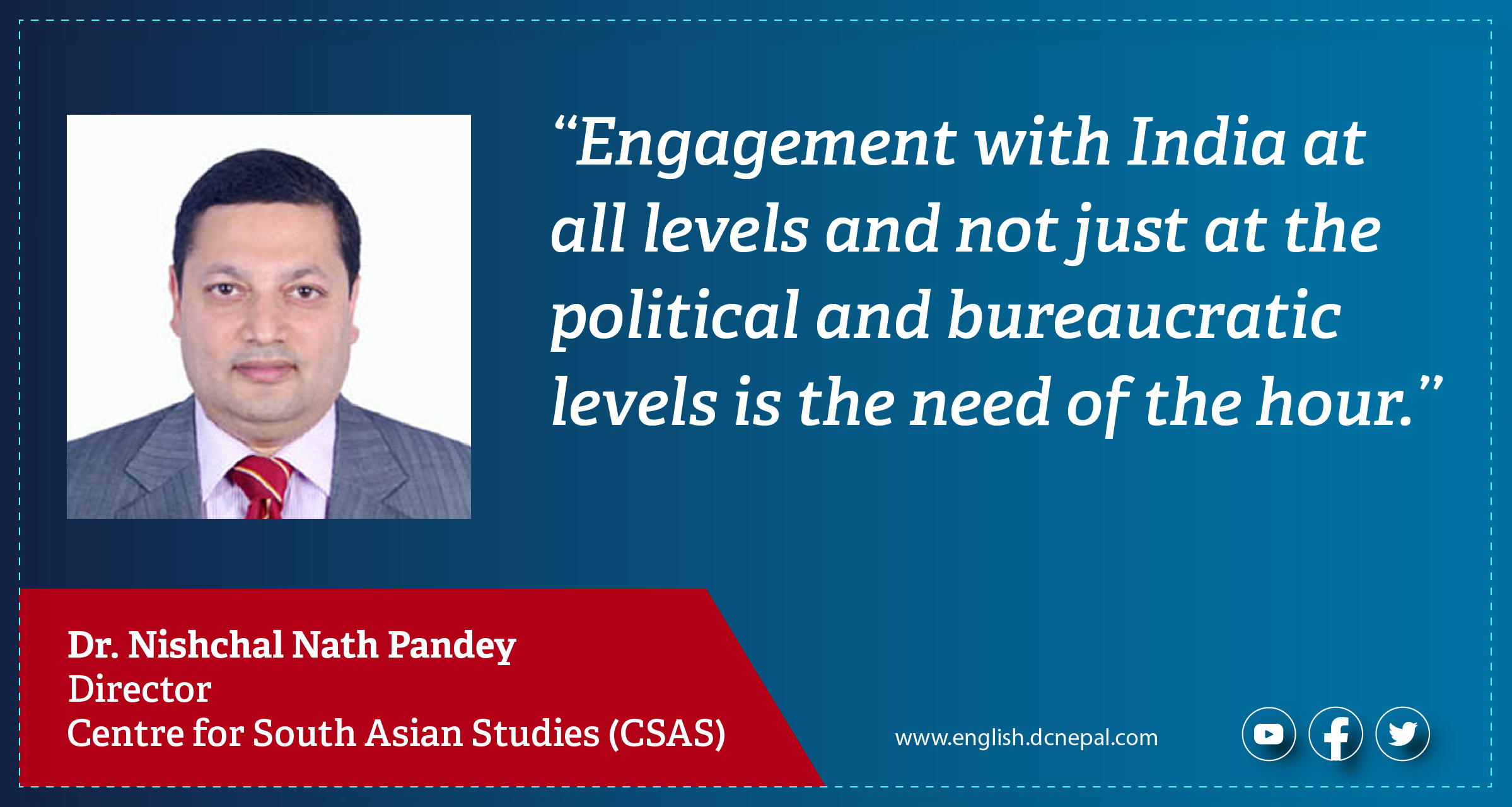 Dr. Nishchal N. Pandey is Director of Centre for South Asian Studies (CSAS), an autonomous South Asian think-tank based in Kathmandu. Previously he was Executive Director of the Institute of Foreign Affairs (IFA) under the Ministry of Foreign Affairs where he worked from 1998-2006. He was also visiting research fellow at the Institute of South Asian Studies (ISAS) in Singapore in 2006-2007 and at the University of Hull, UK in 2009. In 2013, Dr. Pandey was visiting research fellow at the Stiftung Wissenschaft und Politik (SWP), Berlin. A man of letters, he is author of 3 books and has edited over a dozen others. His interviews and articles on international affairs are regularly published in international newsmagazines and journals. Dr. Pandey also teaches at the Armed Police Force Command and Staff College of Nepal. In 2018, he was member of the high-level task force formed by the Government of Nepal on foreign policy.

Below are the excerpts and video of his interview with DCNepal’s senior correspondent Shweta Karki focusing on a gamut of issues concerning Nepal-India relations.

“Some of the fundamental features of Nepal-India relations are cultural, religious, linguistic and matrimonial linkages apart from the political and economic relations. Both the countries have a long tradition of granting the title of honorary General to each other’s army chiefs. There is a requirement for bilateral engagements at all levels and not just the political level. The air flights between the two countries must be resumed as soon as possible. After Indian Defence Minister inaugurated the road and Nepal responded with a new map, there have been no talks between the two countries. This does not bode well for the bilateral relations. Nepal-India relations are also defined by the ‘Roti-Beti’ or ‘Bread, Bride and Boots’ linkage. Let us hope that the visit of the Indian Chief of Army Staff will start a thaw in bilateral relations.”

“I do not know much about the motive and outcome of RAW Chief’s visit to Nepal. We must look into the overall picture of bilateral relations and adopt a careful strategy. Our embassy in New Delhi has looked incapable in several instances. When the Indian media attacked our prime minister, the embassy did not play an effective role.”

“India has had a pattern of risk taking foreign policy behavior when it comes to dealing with its smaller neighbors. Times have changed and China has now made inroads in South Asia. The situation has become such that smaller South Asian states are no longer fearful of India. India has to up the game in its periphery. India-China relationship is at one of the lowest ebb in history. Leaders of both the countries need to show statesmanship to normalize relations. As a small neighbor, we can hope the situation improves at the earliest. As in 1962, we must remain neutral, but at the same time nudge both the leaders to deescalate the situation. Due the situation created by the pandemic and economic recession, we must engage actively with India.”

“Our ancestors and past leaders had the sagacity of coming up with the concept of an open border when the European Union was not even formed. We should make sure that activities such as trans-border crime, terrorism and trafficking are regulated through an identity card system, but the open border regime should be maintained. There is a lack of engagement with India across multiple levels. There is no Center for Nepal in Indian universities. Similarly, there used to be an India Chair at the Tribhuvan University but not anymore. Regular air flights have also been stalled. Engagement at the political and bureaucratic levels is not enough; rather a holistic approach is needed. The governments of Nepal and India have ideological differences. Hence there is no chemistry between the two as the Nepal Communist Party (NCP) is ideologically close to China and not the Bharatiya Janata Party (BJP). ”

“The Indian Army Chief’s visit to Nepal will be a ceremonial one. Talks between Nepal and India are stalled at the moment. Our national emblem consists of our map which makes matters a little more complicated. National emblems of many other countries do not contain their country’s maps in it. Perhaps we need to revisit this, but of course it can be done only through a constitutional amendment. Kalapani, Lipulek and Limpiyadhura are our bona fide territories, but we should not stick only to this issue and stop talking about other bilateral issues. Military diplomacy is a major component of diplomacy, and the Nepali Army has played a significant role in this regard. The regional geopolitical context is dangerous at the moment. The government must rise to the occasion. We must maintain our neutrality. Our relations with India should not affect our relations with China and vice-versa.”

“CSAS has been playing its part through various initiatives related to Track Two diplomacy. We have come up with a lot of publications that can be downloaded for free. We have invited think-tanks, dignitaries, diplomats, academicians and high-ranking security officials so that engagements are carried out in a free and frank manner. The Government of Nepal needs to give priority to such initiatives. We envision making Kathmandu the Brussels of South Asia.”