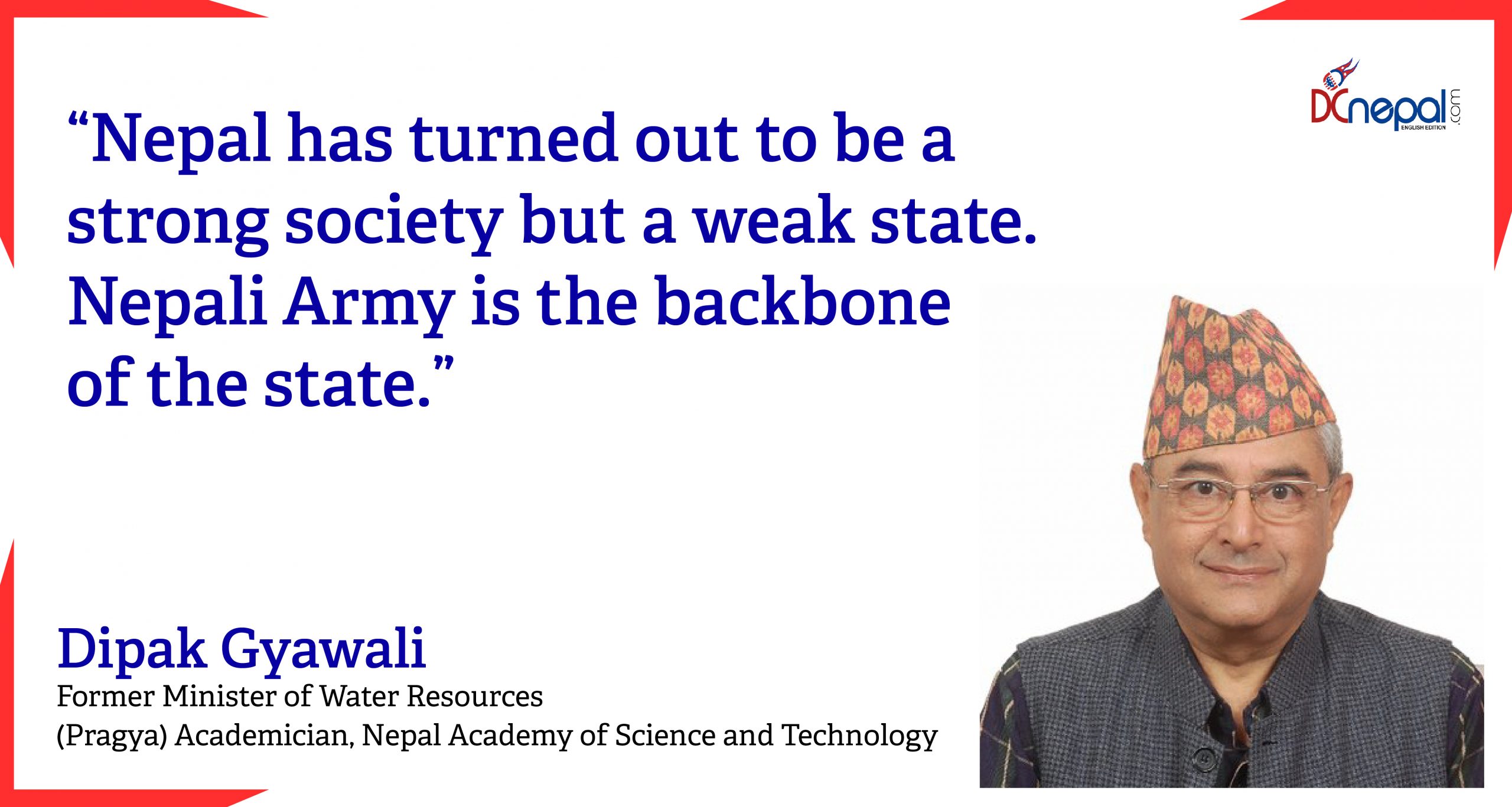 Mr. Dipak Gyawali is (Pragya) Academician at Nepal Academy of Science and Technology and is also a former Minister of Water Resources. A hydroelectric power engineer, he is also a political economist studying natural resources. His research focuses on the interface between technology and society as related to water and energy issues from the perspectives of Cultural Theory (neo-Durkheimian theory of plural rationalities and new institutionalism). During his time as Nepal’s Minister of Water Resources in 2002/03, he initiated reforms in the electricity and irrigation sectors focused on decentralization and promotion of rural participation in governance.

DCNepal’s senior correspondent Shweta Karki discusses a wide range of issues with Mr. Gyawali concerning hydropower, domestic politics and dimensions of international relations. Below are the video and excerpts of the interview.

“Hydropower is a means to an end. Electricity in Nepal is one of the most expensive in the world. We should use hydropower for our own industrialization. India sees electricity as a strategic resource and not an economic one as it is more interested in water than electricity from Nepal.”

“The euphoria created after the political changes of 1990 and 2006 seems to have disappeared. The Westminster model of politics has failed in Nepal. There will be more political instability in Nepal in the days ahead as the youth is frustrated due to COVID-19 management, joblessness and many other pressing issues.”

“The government seems to be nowhere during crises; it is the people and communities that have got together to face the situation. Therefore, Nepal has turned out to be a strong society but a weak state.”

“Joe Biden will not have an easy time as President. More than 70 million have voted passionately for President Donald Trump. The immigrant community has heaved a sigh of relief after Trump’s loss. The coming years could see the end of Pax-Americana and end of the Age of Aid.”

“Foreign interference will always be there in Nepal but India and China will continue to remain the dominant forces. Our political class does not have the same commitment to the nation as some of the great statesmen Nepal has produced in its history.”

“India has now realized that the 12-point agreement was a mistake, but they can do nothing about it as the traditional cultural link which Nepal had with India has been destroyed in the form of Hindu religion and monarchy. China is competing with the US and not India. Narendra Modi’s policies with respect to Pakistan and China are for catering to a domestic base for nationalistic ends that has no strategic content to serve India’s interests. Centrality of army is coming back. Army is the backbone of the state.”