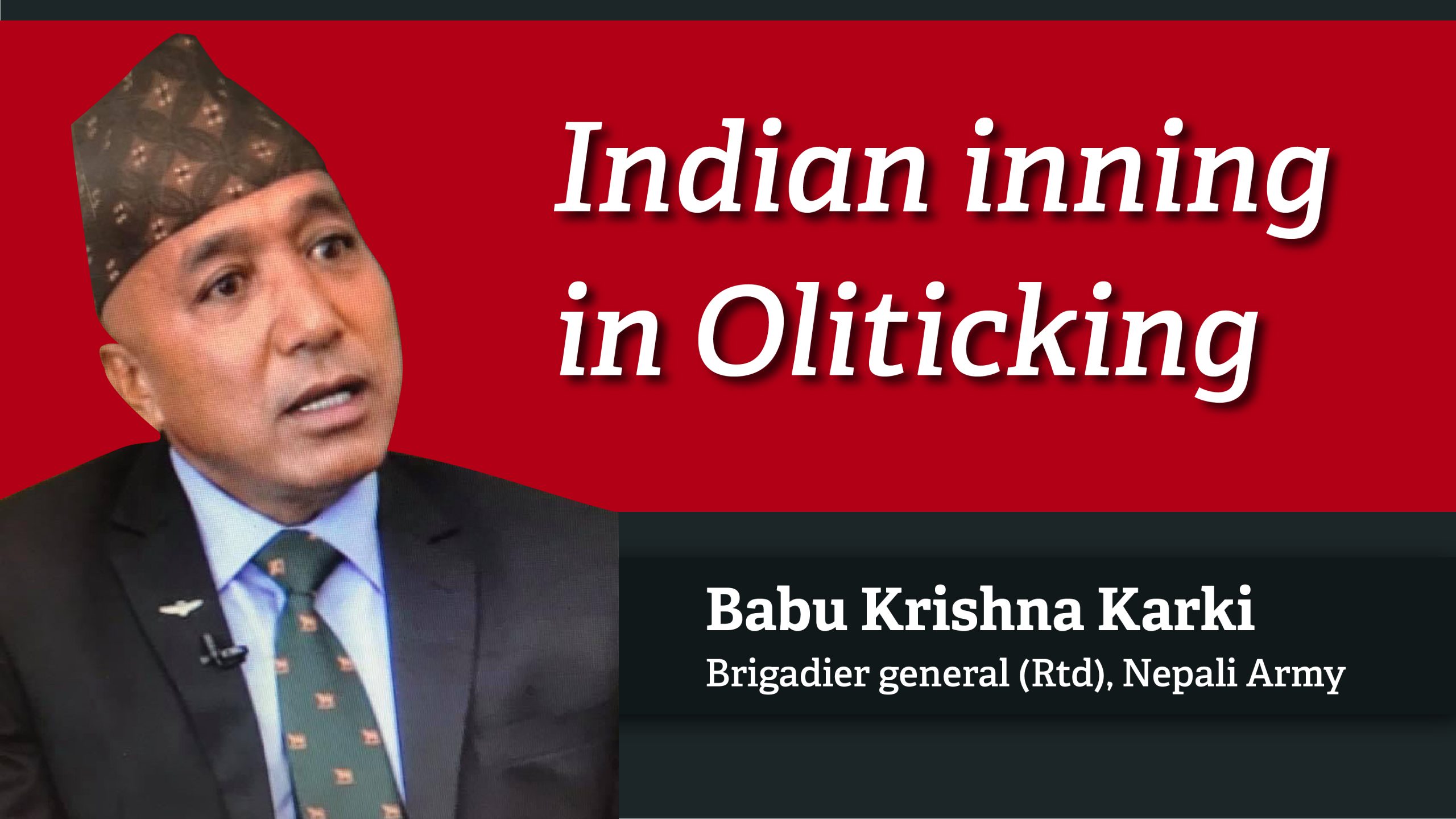 Prime Minister K.P. Oli has time and again proven himself to be a wily and tenacious politician. He has managed to outfox all his peers. On multiple occasions, he has even outsmarted foreign powers – particularly India. In fact, he had even gained notoriety amongst Indian household because he was Indian media’s favorite whipping boy. While his anti-India posturing elevated him to soaring heights in Nepal and even in the region where anti-India sentiment is deeply entrenched, it definitely made him mortal enemy of the Indian establishment. That obdurate Oli, however, shockingly seems to have reversed gear and appears to have become a willing bed-fellow of the Babus in South Block.

The two recent interviews of Prime Minister K.P. Oli in Indian channels are particularly telling. Putting together the timing, content and context, even a layman can figure out that those interviews were scripted and staged to further prop his nationalist credentials. It is simply unthinkable that the same Indian media that dragged Oli through the mud for his Chinese tilt would suddenly entertain Oli’s claims of sovereignty and bolster his internal standing during this tumultuous period. Nepal had to ban Zee news because slanderous TV hosts like Sudhir Chaudhary (who interviewed Oli) were propagating concocted news to malign Nepal and Oli at a personal level. Therefore, to fathom that someone as unforgiving as Oli would allow that same personality the rare opportunity to interview him would be naive.

In fact, Babus deliberately orchestrated the theatrics where Oli gets to take a few jabs against India.  By allowing him to re-assert Indian Embassy’s overt role in plotting to dislodge him and claiming Limpiyadhura and Kalapani falls in Nepali territory are all part of a bigger game plan; a game plan to spruce his credibility and strengthen his position. His position has remained precarious after he unilaterally dissolved the parliament.

The Babus known for their savage and senseless plays in Nepal appear to be attempting to take a sapient step this time. They are aiming to play an unlosable hand by hedging bets on all horses in the race. They are obviously engaging with Oli. The visits of RAW Chief Samant Goel, Indian Army Chief General Mukund Naravane, Foreign Secretary Harshavardan Shringala and BJP’s Vijay Chauthaiwala all in less than a three month period stands as a testament. Besides that, the impending visit of Foreign Minister Pradeep Gyawali during such critical times is also another indication. On the other side, Pushpa Kamal Dahal and Madhav Kumar Nepal are being vehemently prodded by another set of Babus to set Oli’s trousers ablaze to dislodge him from the high pedestal. Another set is engaging with the Nepali Congress and the Madeshi forces including the Baburam Bhattarai sect. Baburam’s staged interview with former Ambassador Rajit Rae is all part of this class act.

Besides the parliamentarian forces, it has also successfully managed to raise the bogey of the Hindu and Monarchist forces. The nation-wide fervor for the return of the Monarchy and Hindu State during this critical hour has circuitous links to Babus in Delhi and other Babus in Bihar and UP. They are clearly fuelling Monarchists’ tanks as well. Thus, they now have the entire political spectrum covered.

After strenuous and stealthy maneuvers, Babus have managed to outclass the Mandarins in Nepal for the first time since they imposed an inhumane blockade on Nepal in 2015. Against the Chinese desire and efforts to consolidate the communist forces and strengthen the Nepal Communist Party (NCP) party, India has slyly managed to wedge an irreconcilable divide in the ruling party. This political force that secured an overwhelming two-third majority had become a major headache for India since it took an unyielding stance against it during the blockade. Similarly, Nepal’s parliament had become another bone in the neck after it unanimously and hastily endorsed the new political map that included disputed Kalapani and Lipulek areas. Despite a massive deployment of its assets and agents in Kathmandu, India had then failed miserably to stop the parliament from endorsing the map.

But this maneuvering of Babus is like a cat trying to bury poop in a frozen pond with its eyes closed. Babus presume that no one will get a whiff of what they are up to if it is done in a hushed and stealthy manner. Despite an attempt to contain Delhi’s euphoric mood over this tactical gain, Messers like Shyam Sharan, Ashok Mehta and S.D. Muni have already spilled the beans through their writings. According to Muni, India has assiduously cultivated a façade of non-interference. India remains tight-lipped and is reiterating it is Nepal’s internal matter to sort out and that they have no hand in the mess Nepal is in. Their communiqué and narrative is confined to the word “Noted.”

That, however, is far from the truth. As former Indian envoys have publicly expressed, all of recent developments in Nepal are India’s doing. India has been busy more than ever with its playbook and plots. Ever since it gained independence from its colonizers in 1947, Babus have never desired peace, stability or prosperity in Nepal. History is replete with occasions where they have overtly and covertly sought to instigate instability in Nepal. India has persistently pursued the “Controlled Chaos” policy in Nepal because it reckons that it can gain more out of Nepal’s instability by increasing the reliance of wrangling Nepali constituencies on itself. Instability remains India’s favorite tool in its playbook for Nepal. The Babus through historical experience have acquired that fine skill-set of dividing, ruling and extracting for the created fissures. They are now pursuing that line even more rigidly to offset the Chinese influence in Nepal. Additionally, as claimed by the same Indian luminaries, the Americans are tutoring the Babus and augmenting their playbook to avoid embarrassing fumbles against the Mandarins.

While the Babus may have secured this inning and are probably basking in their glory for this remarkable reversal, the Machavellian Mandarins are less likely to accept defeat easily and walk away with their tails between their legs. Their shadow-men are stealthily trickling into town with pockets full of Yuan to overturn Indian gains. The bewitching Chinese beauty serving as its envoy to Nepal (who has been begrudgingly labeled by the former Indian foreign as an “activist ambassador”) has been sprinting around town tirelessly to bring Oli and Nepal back from the tightening Indian grip.

The first politician in the neighborhood in recent times that has stood up resolutely against Indian intimidations and actually come out on top is probably Oli. He was even shrewd enough to hurl a rock and create a huge ripple in India’s divided internal dynamics through his jaw-dropping claim that Lord Ram was born in Ayodhya Puri of Nepal. That unpalatable claim had struck the raw nerve of the Babus so much that they were waiting for the right moment with a brickbat of their own.

When the time was ripe, they deployed Zee News’s Sudhir Chaudary for a dual purpose. Chaudhary’s purpose in Nepal was not just to be an accommodating anchorman for Oli. Rather, he was an integral part of India’s playbook that aggressively sought to retaliate and punish Oli for his audacity. That was evidenced by the brazen manner in which Chaudhary reported from Everest base camp and exhorted India to stake a claim to that Mountain. A petty anchorman could never have the gall to make such incendiary claims had he not been instructed by big Babus in Delhi. The cheeky Babus definitely deserve the brownie points for the finesse with which they delivered the tit-for-tat response to Oli’s outlandish Ayodhya claim.

Oli is a snake oil salesman extraordinaire but India is also known as the land of bobble-head snake charmers. Hence, it will be fascinating to watch whether Oli will succumb to the landmines laid by the Babus or he will wriggle his way out again and stupefy them. As articulated by Oli, irrespective of how the elephants play – together or against one another, the Nepali ground will inevitably get stomped. Therefore, irrespective of how the Babus and Mandarin playbooks unfold, one thing is certain – some level of instability in Nepal is imminent. But, protecting and preserving some semblance of Nepal’s national dignity and stability rests on the Oli’s ability to play mahout and temper the elephant plays. If he fails, Nepal may possibly be poisoned by Indian ghee or forever trapped in Chinese debt.