Reservation System in Nepal: A wrong turn on taken as a criticism 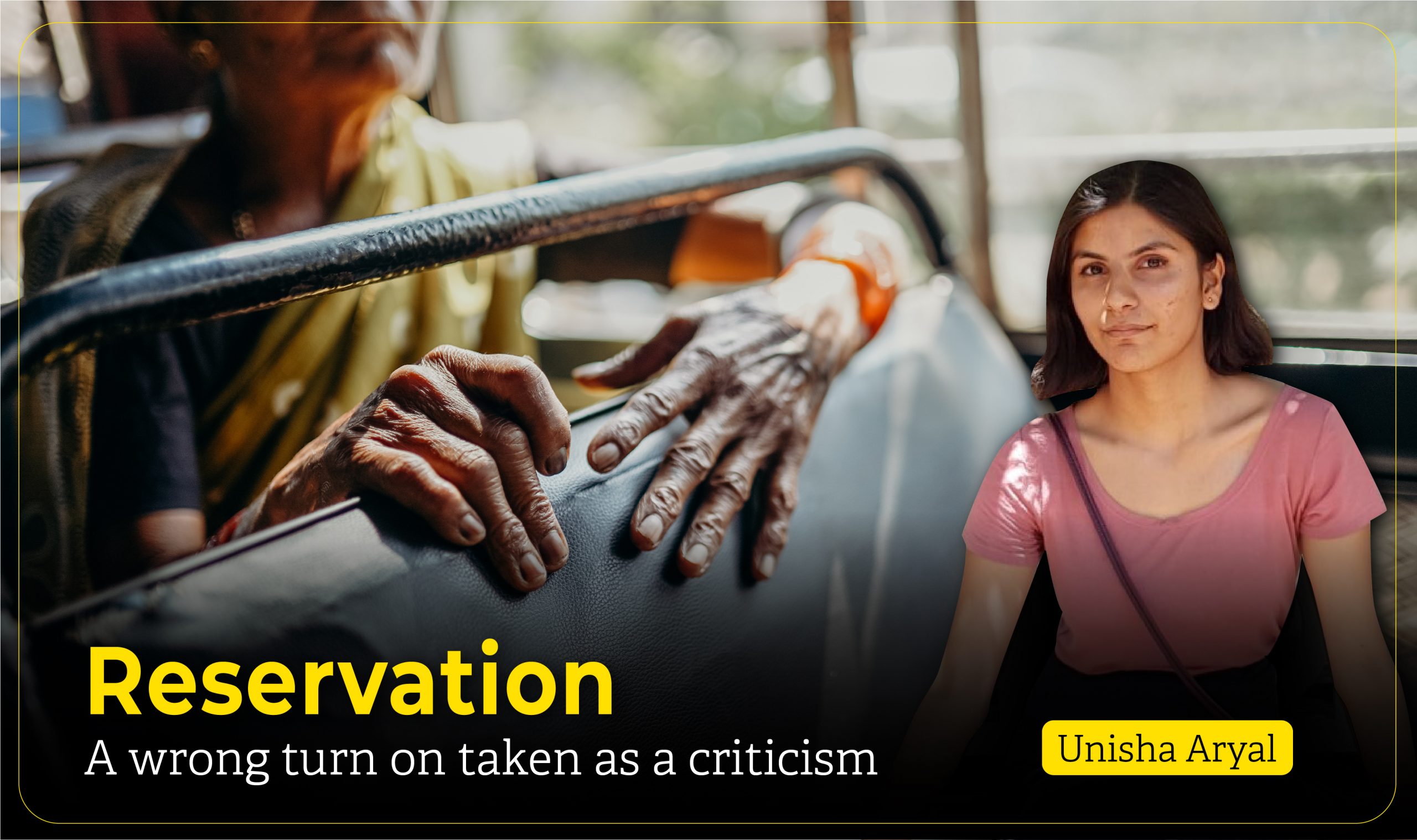 Nepal is a country with unity in diversity. People from various ethnicity, caste, religion, and linguistic are united from history. The state is the only guardian of the citizen. The state is responsible to every individual for providing their rights and duties. Every individual has the right to live with dignity and the right to life. There are people in a country living above the existence margin and others below the existence margins. People who are below the existence margins must be uplift to the existence line by the state. According to UN Declaration 1992, the rights of individuals belonging to national, ethnic, religious, and linguistic attributes are minorities. Minorities are those people who do not have equal access as other people in various types of academic as well as in professional areas. The state has developed one system for those marginalized people who do not have access to various fields and aspects. The system that is made for the minorities to maintain their position as other people in the society are termed as a reservation.

The reservation system is the process of uplifting the marginalized people through a policy provided by the state in various fields like education, political sphere, governmental jobs, other kinds of employment, and many more. Reservation is affirmative action. It is not absolute but relative. The state is more liable towards the marginalized people because they must be guided properly to come into the existence level. They must be standing in the equal line as the other ‘Brahmin’ and ‘Chhetri’ are holding their existence. The state has provided various types of rights and remedies to the marginalized people but it is being used by the elite ones. For example: – There is one man belonging from well off family of Dalit community, he is going to apply for a government job. And on the other side, there is one man who is applying for the same government job but the difference is, he is not financially well off or economically backward. Is it necessary to provide the facility to the well-off one? The system is made only for those who did not have any forms of economic generation process or least income in the family. But in Nepal, all the good economic holders are utilizing the reservation system and misusing it.

Nepal introduced reservation system after the end of 2006 people’s movement. Civil Service Act 2007, the policy was introduced in a way that 45 percent of the total vacancies in government sectors were allocated to marginalized groups of people. The state was progressing from the past but it failed to manage the system according to the provision. The state must make the strict notions that people from the marginalized communities will have access to various rights but those who are well off are not allowed to enjoy the reservation rights. We can see many of the marginalized people are struggling to make their life secured as others. But they are always neglected by the state in such periphery. The state is making provisions and providing rights to the marginalized one but it is not being used as the aim which was framed before providing the rights.

An egalitarian society is not possible when there will be the misuse of reservation rights. Until the people utilizing the rights of other helpless and needy ones, there will be always injustice in society. In Nepal, to the full extent, the system of reservation is being misused. The reservation system must be there in a country but why to the economically strong family? It is especially for those who are not able to sustain their living. The concept of the reservation system is very vague and hot discussion as always. Minorities are politically representative less, financially poor and incomeless, and socially discriminated as a higher and lower caste, touchable and untouchables. Due to the above reasons, they have gone towards marginalization. So, they have raised some demands in order to uplift their own position so as to share power and opportunity.

Reservation is not a separate one but from the past, it has been a form of discrimination itself. We can take a look at the long history of Nepalese hegemony where there has been a tyrannical ruler who ruled for a long period of time. Here we can come to one conclusion that tyrannical rulers created a lot of discrimination, exploitation, and marginalization itself. Reservation cannot mark the historical injustices against the marginalized people, but at least it can be served to them as a starting point of progress. The experience of recently elected Dalit ward representatives suggests that quotas are like crumbs for the starved, useful but insufficient. But the high-caste men in power are afraid to offer even crumbs to the excluded groups.

People who are economically and socially backward and their position is not still to date. This backward position of them is harmful to the process of nation-building as a whole. So, to promote their access, rights, and enhancement the reservation system is a must.

In the upliftment of minorities, we should take new policy in order to promote the position in politics, economy, and social spheres. Promotion of access in decision and policy making of the state is possible when the state implements the proportional model of representation. When people feel safe and secure, there is a virtue that societal diversity is valued, independence among various groups is recognized, violence is rare within the communities, and equality is actively pursued.

There are various types of laws and acts where marginalized people are equally standing as other people. Like, Article 18 states that it is right to equality and under sub-article, the concept of propositional representation is also mentioned. Here, for not misleading my article, this article tries to provide the information that people who are wealthier are getting more facilities than other the one who must be provided with. The people who are economically back warded even do not know what is going on in the state and what are their rights related to reservation. People who are being on the position or utilizing the facilities for many tenure and others are even not aware. This article aims to convey the message that reservation is especially made for those ones minority who are not being able to establish themselves in the society and state at large. State must look such vulnerable in the first instance and other parallelly. Reservation is not about caste and ethnicity; it is all about the process to bring the vulnerable communities in the level of existence.

One of the criticisms of the reservation is that the wealthiest one is only being forwarded rather than the economically weaker one, and thus it must be strictly put into consideration. The main goal to establish a reservation system in Nepal is to help those individuals who are facing discrimination to get equality and equal representation in all sectors. There is a wrong message going on that reservation is for the division of the caste and ethnicity among the people and creating class struggle in the society but it is all the mindset of people who are afraid their position or status will be taken by others. The only aim or objective of the reservation system is to uplift the marginalized ones and bring them to the equal level of others to live together. Thus, the reservation system must take the right path for the upliftment of the minorities without neglecting them.