Seeing the government seeking opportunities to earn money during the pandemic, frustrated COAS Purnachandra Thapa has turned away from the CCMC meetings. 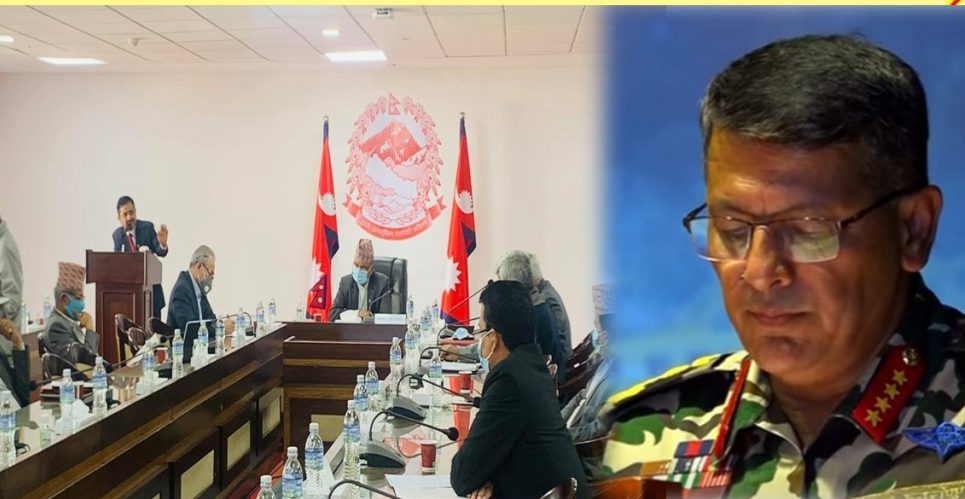 Kathmandu, May 6. As the second wave of COVID-19 rattles the nation, the Chief of Army Staff General Purnachandra Thapa has stopped attending the meetings of the Crisis Control Management Committee (CCMC). The officials of the national security agencies are concerned about the commander’s absence.

But, what made COAS Thapa turn away from the meetings?

According to sources, in the past several months, the Nepali Army had proposed a chain of action plans for the preparation and management of possible future stages of pandemic. But, the proposals were constantly ignored by the CCMC co-ordinator, Deputy Prime Minister, and Non-Departmental Minister Ishwar Pokharel.

Disappointed with the committee’s ignorance, COAS Thapa has not participated in any of the Pokharel-led meetings for the past 3 months. He has been sending a high ranking military representative for formalities only.

After assessing the first wave of COVID-19, the Nepali Army had predicted a larger and dangerous second wave of the virus. Several months ago, experts in India had forecasted that the second wave may shortly invade the cities of India. Since then, the Army had been proposing the government to control and monitor the Nepal-India border and establish holding centres.

The army had also requested the government to coordinate with embassies and import health supplies, ventilators, and medical oxygen. Moreover, the military also reported that many oxygen plants in the country that were out of operation should be repaired and operated with the assistance of local authorities.

COAS Thapa had himself participated in the presentation of the proposal. But, the ignorance by Pokharel and the committee indicated that the Oli-led government wanted to keep the army away from the COVID prevention and management.

The presentation report submitted by the Army also included ways for proper import of quills and the effective management of vaccination programs. The report suggested that timely execution of the vaccination campaign could prevent deaths.

Now it has been revealed that the government fueling commission brokers is not capable of importing vaccines. The brokerage commission demanded by the Former President of the Federation of Nepalese Chambers of Commerce and Industry Suraj Vaidya and businessman Bijaya Dugar is holding people from getting the second dose on time. The profit-making intention of the government is risking the lives of common people. The death rate is also soaring up.

Social media is overflowing with demands for an immediate probe into the matter. The Public has been urging the government to punish the criminals. But, Prime Minister KP Sharma Oli has shown no signs of acceptance towards the investigation. Instead, Oli has granted Pokharel and his commission players to import future consignments.

Earlier in the case of subsidized vaccines, the government had no injection to inoculate people with the imported vaccine doses.

Why is the army burning corpses in river banks?

Two out of three electric crematorium units at Pashupati had broken down a long time ago. The Nepali army has been requesting the government to repair the damaged machines because burning corpses on the banks of the Bagmati River is not safe. But, the CCMC has not paid attention to the issue.

A high-ranking military source told DCNepal, “The government has not only ignored armys’ proposals, but It has failed to see the pandemic as a crisis. Seeing the government seeking opportunities to earn money, frustrated COAS Thapa has turned away from the meetings.

At this time of crisis, thousands of infected people are added every day. In such a situation, what will happen to the country if the Army gives up?

Click here to read the Nepali version of this article.