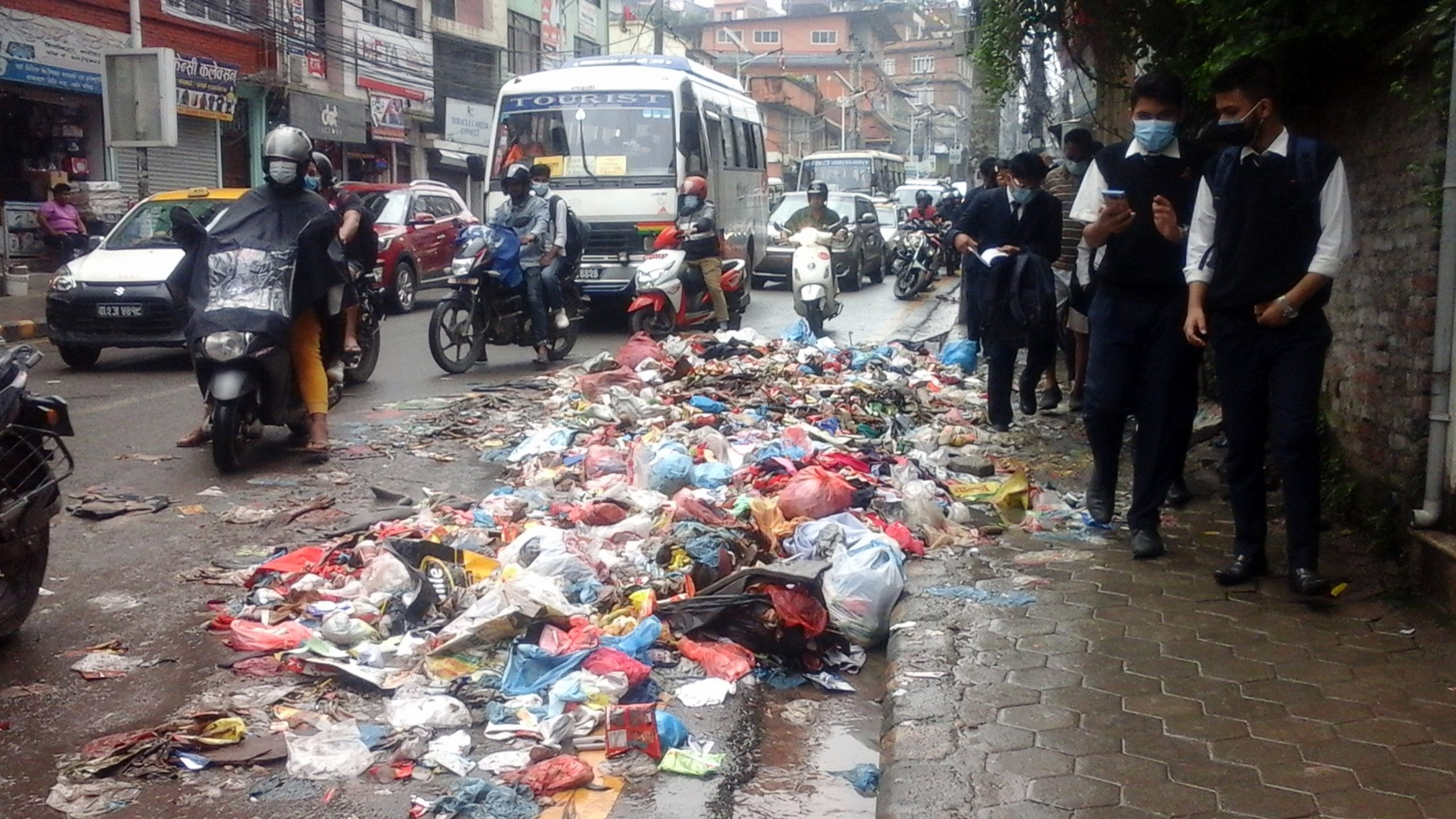 Kathmandu, July 19. Solid waste management in the Kathmandu Valley has been a perennial and pressing problem without a sustainable solution yet.

It seems living with waste piled everywhere in the streets has been a routine life for the residents of the Valley with garbage often waiting for its collection and disposal for days. Health risks posed by unmanaged waste have been a major concern while people passing by heaps of waste in the Valley’s streets have been affected. Furthermore, unmanaged solid waste has degraded the beauty of the Valley.

However, election of Balendra Shah to the mayoral post in the Kathmandu Metropolitan City (KMC) through the recently held local election has instilled hopes. Main election agenda of Shah, who won as independent candidate, was to find a sustainable solution to waste management in the Valley. People pinning their hopes on him is he who has won independently driven by his passion and energetic character.  Time will tell how far he will be able to deliver.

But, Shah’s efforts are ongoing. Following his election as KMC mayor, he reached out to the residents of Sisdole and Bancharedanda where Valley’s waste was being dumped for years and inquired about their problems caused by the dumped waste. He is also figuring out what possible alternatives are out there to the problem.

As part of his plan to manage waste, he has come up with the slogan ‘rupee from rubbish’ by classifying biodegradable and non-biodegradable waste produced from the Valley. The KMC has already asked residents of the Valley to segregate waste at the source of its origin as biodegradable and non-biodegradable. Waste segregation has come into effect from July 17 and at all 32 wards of the KMC. Efforts are on for the same in other local levels (Lalitpur and Bhaktapur) of the Valley, it has been said. The KMC has led the collection and disposal of waste produced from the Valley.

As per the schedule, biodegradable waste is picked up at the source of its origin on Sunday and Wednesday and non-biodegradable on Monday and Friday. A person defying the waste segregation is fined Rs 500.

However, challenges remain ahead, especially in the management of segregated waste.

Preparations are underway to dump the segregated waste collected from the Valley separately at a landfill site, Bancharedanda, for some time, says waste expert and engineer Sunil Lamsal.

Problems remain the same by dumping separated waste in the same place at a time when residents of the dumping site, Bancharedanda are seeking alternatives and there is a demand to reuse it at the source of its origin, according to the local people.

The KMC has identified five places in Kathmandu to dispose waste. After three months, hazardous garbage will not be dumped at Bancharedanda, says the KMC.

The metropolis has come up with a plan to reuse biodegradable waste produced from the Valley as organic fertilisers.

Experts have suggested some solutions like reducing the volume of waste at the sources of its origin along with its segregation, the adoption of the zero waste concept and the use of modern technology to manage garbage.

Residents of Sisdol and Bancharedanda have been protesting, in many times causing a halt in garbage dump, stating that they have been badly affected by dumped solid waste. Besides being exposed to health issues, they have complained about issues like a drop in the quality of their agricultural products and the disease to their livestock caused by leachate from solid waste.

Recently, the KMC struck an 18-point agreement with the locals of Sisdole and Bancharedanda following their protest, thus allowing the disposal of garbage from the Valley.

The KMC has been in collaboration with the private sector to pick up garbage from the Valley. However, the private sector has been often accused of being irresponsible to citizens. They have also been charged with charging the locals of money for collecting waste.

The KMC has now warned of taking action against the private sector for their irresponsibility.

The KMC has unofficially reached an agreement with various 32 private companies to pick up garbage from the Valley. Lack of an agreement in writing with them has created problems, it has been said.

Experts however believe that waste segregation is not a final solution. But it will help decrease the volume of biodegradable waste, they view.

Environment expert Prakash Amatya has suggested disposal of segregated waste separately. A permanent way should be sought to manage garbage collected from the Valley within, he is of the view. “For this, local level should focus on reusing waste. 40 percent of waste produced from the Valley can be managed.” (RSS)