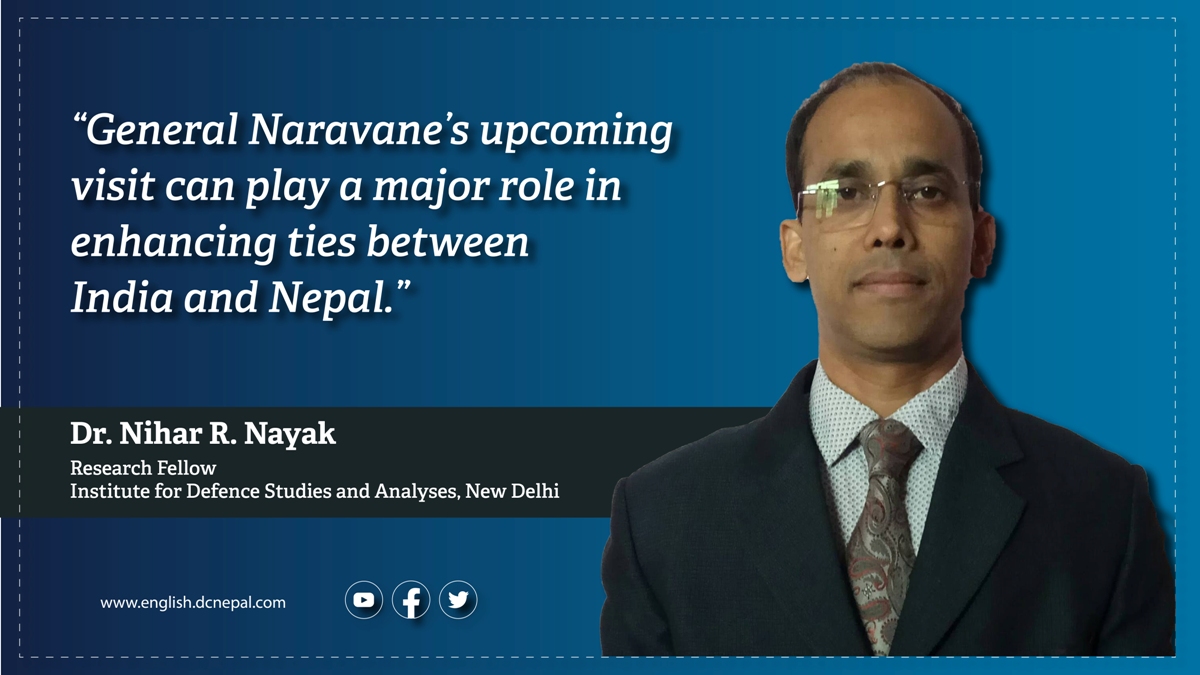 Dr. Nihar R. Nayak is a Research Fellow with Institute for Defence Studies and Analyses, New Delhi. His area of expertise is climate change impact in the Himalayan region, non-traditional security, Maoist conflict and cooperative security in South Asia. He has completed Ph.D. in International Politics from Jawaharlal Nehru University, New Delhi. He has also served as visiting fellow at Peace Research Institute Oslo, Norway and visiting faculty at Banaras Hindu University.

Dr. Nayak has both national and international publications to his name including the book “Strategic Himalayas: Republican Nepal and External Powers”. Below are the excerpts and video of his interview with DCNepal’s senior correspondent Shweta Karki on issues related to the impending visit of the Indian Army Chief to Nepal and the overall state of ties between Nepal and India.

“Chief of Army Staff of the Indian Army, General Manoj Mukund Naravane’s upcoming visit to Kathmandu can play a major role in enhancing the ties between India and Nepal.  The approval for the visit shows the willingness of both the governments to strengthen bilateral relations. The armies of India and Nepal are considered to be strong institutions within their respective countries. During this visit, there may not be direct talks on the ongoing border dispute between the two countries, but it will work as confidence-building measure to improve the ties.”

“General Naravane has already corrected his statement with reference to the border dispute between Nepal and India. If all goes well, the border talks may start in November or December.”

“There are many contentious issues in India-Nepal relations. Such matters are separate from military to military relations, which are excellent in nature. Some of the major issues to be tackled are management of the open border, Eminent Persons Group report and 1950 Treaty among others. The government of Nepal has been raising the border issue from time to time, but the Indian government has not responded. Therefore, some communication gap is there which needs to be sorted out. “

“The media, instead of playing a constructive role, is focused on increasing its ratings rather than helping to strengthen the bilateral relations. The linkages between India and Nepal are not only limited at the government levels but encompass a wide domain that include culture, diaspora and family ties. Political willpower is a must to improve bilateral relations between the two countries.”

“In spite of close geographical and cultural relations, the two countries are run by parties that have completely different ideologies. Nevertheless, there is a good political connection. As 80% of Nepal’s population is Hindu, there is no harm even if the country is again declared as a Hindu state.”

“It is true that the use of soft power has failed to strengthen our bilateral relations to the desired effect. The ‘Roti-Beti’ relations are not only limited to Madhesh but encompass different regions of Nepal. The ties between India and Nepal are so deep-rooted that one of my Nepali friends calls it the ‘Bread, Bride and Boots’ relations.”

“Nepal’s contribution to India’s security is immense. India’s interest would be best served if Nepal becomes strong so that its northern frontier is secure. India should ensure that the projects undertaken by it in Nepal should finish on time. All the irritants in the bilateral ties, including the border issue, should be removed. General Naravane’s visit could be pivotal in that regard. Nepali Army COAS General Purna Chandra Thapa is considered to be an intelligent and efficient commander. Both the Generals could play a major role in helping to elevate the relations between the two countries to greater heights.”